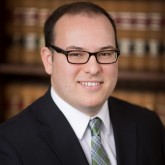 Prior to joining the firm, Dan worked as a Labor Relations Trial Examiner at the New York City Office of Collective Bargaining. As a Trial Examiner, Dan acted as a neutral decision maker in improper practice and representation cases between the City of New York and various municipal unions. He conducted pre-hearing conferences and hearings before drafting decisions for approval by the Board of Certification and the Board of Collective Bargaining. He also provided information to potential pro se petitioners regarding the NYC Collective Bargaining Law and OCB Rules. While in law school, Dan gained valuable experience working at a union-side law firm, Region 2 of the National Labor Relations Board, and the NYC Patrolmen’s Benevolent Association.

Dan currently lives in Boston. He spends most of his time outside the office with his fiancé, Allie. He enjoys running, talking baseball (especially the Red Sox), and watching a good movie. Through a series of road trips, and a few wrong turns, he has driven through 38 states, and he is looking forward to getting to the other 12.