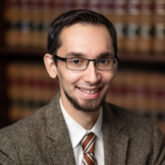 When he isn’t being a lawyer, Nick is a long-suffering Northeastern hockey fan and can be spotted at home games at Matthews Arena, he also frequents Boston’s many independent movie theaters, and tries to attend as many blues concerts as possible. He has lived in Boston for the last nine years, and currently resides in Dorchester.