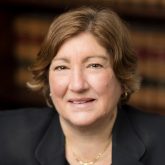 Susan has been practicing labor law with Sandulli Grace, PC since graduating from Northeastern University School of Law in 1984. While in law school, Susan was a coop student for the law firm: she and Alan Shapiro shared a basement office while Joe and Ken had lovely windowed space on the upper floors of a Beacon Hill townhouse. Although the firm has since relocated to downtown Boston, Joe still has the office with the best view. After all, we do believe in seniority office bidding.

Before attending law school and moving to Boston, Susan spent five (5) years working in personnel and labor relations for the U.S. Labor Department in New York City. There she was involved in bargaining with the AFGE for Region 2 and Washington DC. Prior to her work at the Labor Department Susan was a VISTA volunteer working as a paralegal for legal services in Tacoma, Washington.

GOLDEN RULE – Give your client your undivided attention and fight like hell for what is right.